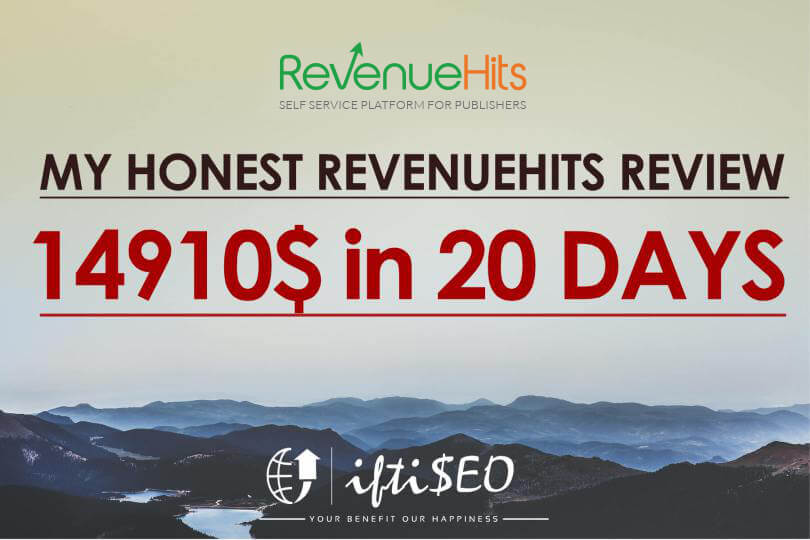 Most of you facing the above issues must be reading this post. Right ??

So, I thought of sharing my personal experience with an Ad network called – Revenue Hits !!! By now, many of you must be just thinking to scroll down to images that shows my statistics, while some of you might just close this post thinking it as a sponsored review.

Before I start, let me clear this, RevenueHits didn’t pay me a penny for this review.

Without wasting time, let me start !!

The first question you might have is, is it an AdSense alternative ??

Well my answer to it is NO. It is not an alternative. Why ??

AdSense is a CPC based network while RevenueHits is purely CPA (Cost Per Action) based network. So what does it mean ??

It simply means that even if you get 10,000 views, you may end up with 0 earning unless and until your traffic converts. While in the case of using AdSense you get paid for every valid ad click on your website. So there’s a huge difference in it.

So Won’t it be difficult to get conversions ?? How will the traffic convert ?? And is it really worth trying ?? Having such questions !! Let me clear it out. 🙂

When to use RevenueHits Ad Network ?

So here’s when you MUST try RevenueHits !!

These are some instances !! You can try it anytime on your site.

One review that you will read everywhere is, even after 1000s of clicks, earnings are 0 !! Well yes, that’s true. But it doesn’t mean that the network is bad. There are mainly 2 reasons that I want to clear here.

Firstly, your traffic may not be good enough to get converted.

Well, you can do two things. If you are assigned an affiliate manager ( you can easily get one if your traffic is good), then you can contact him (usually on skype). The manager will start optimizing ads for your site. What happens is, he/she will be trying out multiple ads and set those ads that converts on your traffic.

Now since there are over 5000 different ads (or maybe advertisers) on RevenueHits, it usually takes time to get optimized. For me it took 3 days.

You have to be patient till then. If it doesn’t work after optimization, then you can move on and try some other network, but if it works, it will make you good money.

Payments are always on time, I will be sharing about it later in the post.

My RevenueHits Statistics and Income Proofs (14910$)

I won’t be sharing the site I used with RevenueHits but I will be sharing all the traffic statistics and income proofs from RevenueHits.

Warning: You may see some snaps that may blow your mind. 😛 hehehehe

So, one of my site was getting really huge traffic.

So, as you can see the traffic was quite huge. This was not the total traffic with which I made all the money. This is a part of it. Also notice that the traffic was mostly organic and others metrics were also good (Pages per sessions, session duration and Bounce Rate).

But !! I had a big problem with it. AdSense was not compatible with my niche. 🙁

Using AdSense with it was quite risky. And after 2 years of blogging, I learnt that playing risky with AdSense will never gonna help me. So instead of using AdSense, I decided to try different ad networks (as well as affiliate networks).

I admit, its really hard to find alternate monetization sources, however I somehow took time and contacted a few networks. RevenueHits was one of them…

Here’s the first reply I got from them.

We took it to Skype and he set me up the account. Seeing my traffic ( i sent him snapshots from analytics), he set me an account that they call as VIP account. I will discuss benefits of VIP account later. 🙂

Note: The ad units I placed were only banners. My manager told me to use Pop-ups but I didn’t, I was afraid that I may lose my rankings as popups many times lead to high bounce rate and pogo sticking.

I placed the ads on the same day itself and waited for the next day to see the reports. (The reports of Revenuehits are updated daily at 5 PM GMT).

So I had to wait for an entire day, My traffic was all with them. I was really becoming impatient to see the day 1 results.

Many of you will be saying that the stats are poor !!

Let me clear out few points.

So this was a niche that was quite odd to work on. The traffic was in bulk, but the traffic wasn’t always powerful in terms of quality. This made it even more difficult to monetize it.

I however complained, as I wanted a higher CPM. The manager told me that it would take 2-3 days to get the best.

Here’s more from our talk. 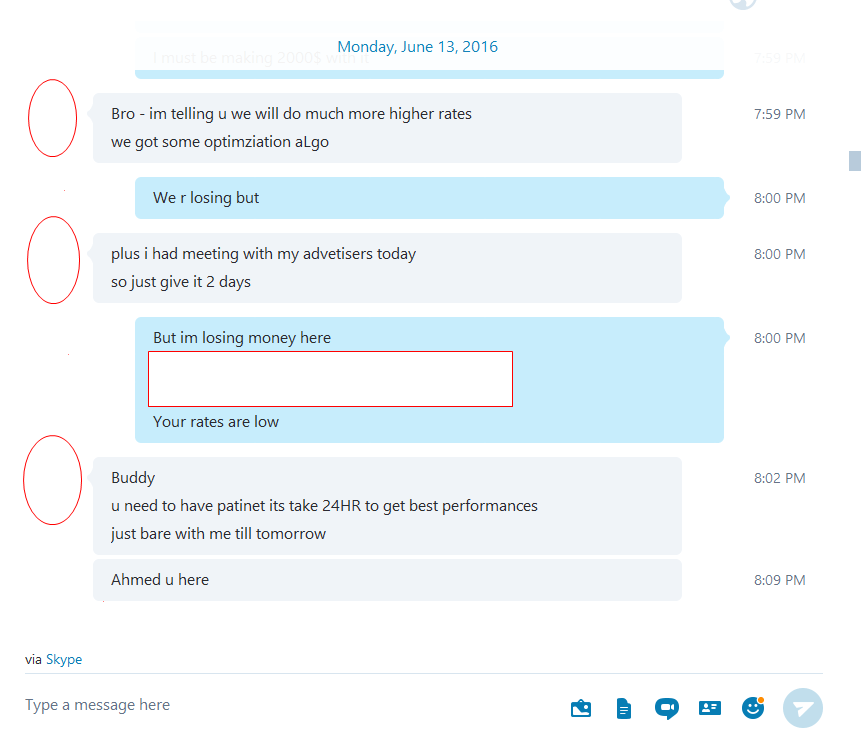 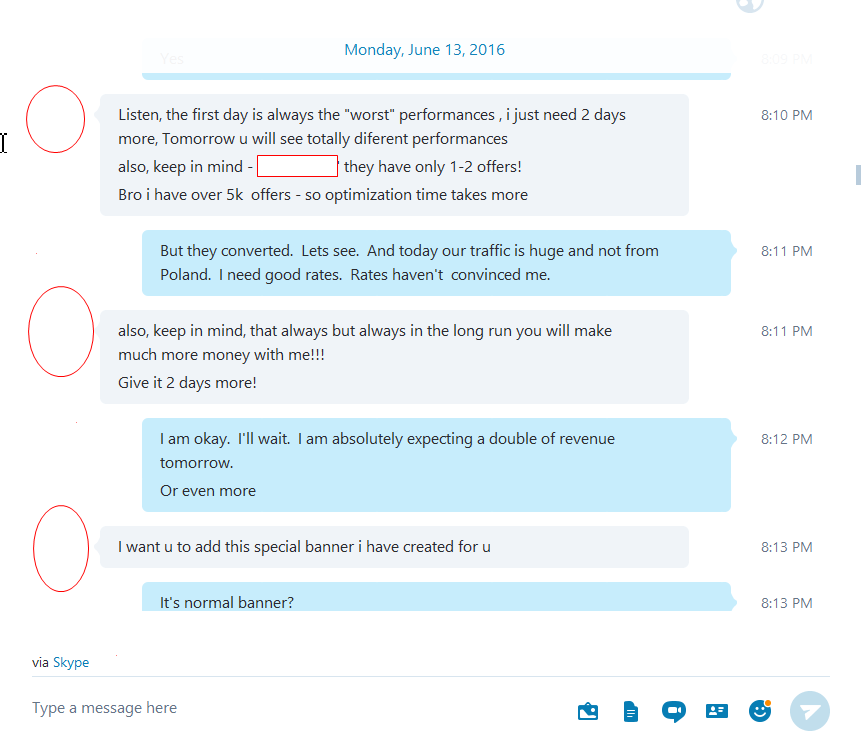 As you can see I was not convinced then, and wanted him to improve the rates.

But, deep down, I knew, there’s no alternate ad network. Neither would any affiliate network promise me such results.

So despite all the complaints, I decided to continue with them. 🙂

The money was indeed increased, but it was also due to increase in traffic. 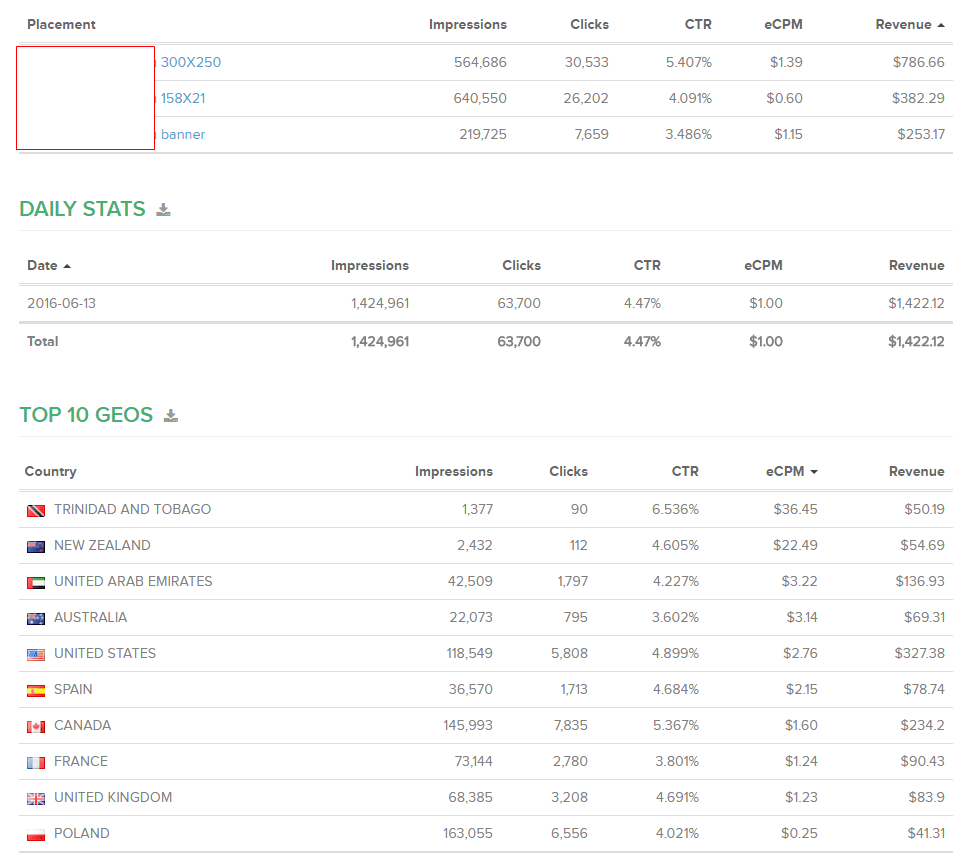 This time I was mad, as I got no increment in overall eCPM. 😛

But I also noticed one thing, the 158*21 sized ad unit was under-performing and it was the main reason behind low eCPM. It got nearly equal number of clicks as the 300*250 unit got, but the earning were half.

It did get many clicks but it didn’t convert. It was a concern for me!!

I complained about it. Changed a few placements and also it was day 3 of their optimization. So here are Day 3 results !!

eCPM got improved. This was the time I decided to continue with the same network without thinking.

I was also introduced by one more manager, as I was given a good rating by them. The new manager was as good as the other one and I had no problems in communicating with either of them. (Skype or Call was the medium).

Moving on !! I had $3000 in my revenuehits account !! Now the next thing that came in my mind was, WILL THEY REALLY PAY ME ?

I was very much worried and the internet had some negative reviews too. I couldn’t resist and asked them the dates of payout. 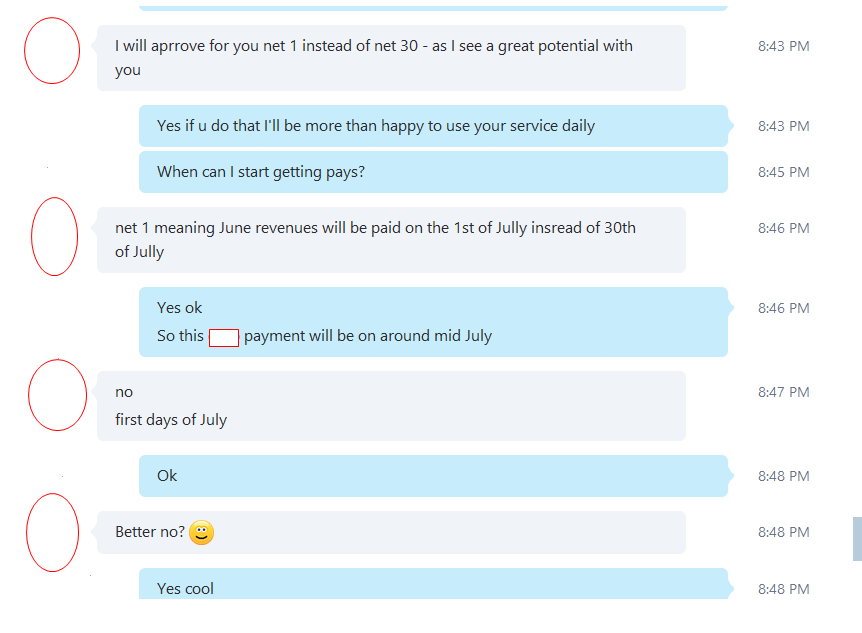 I was amazed !! They approved me for payment on NET 1 basis !!

It meant that all the money that I earned in June was to be paid on first week of July (And I got paid) . Even AdSense doesn’t have this feature. 😛

I trusted more on them now. 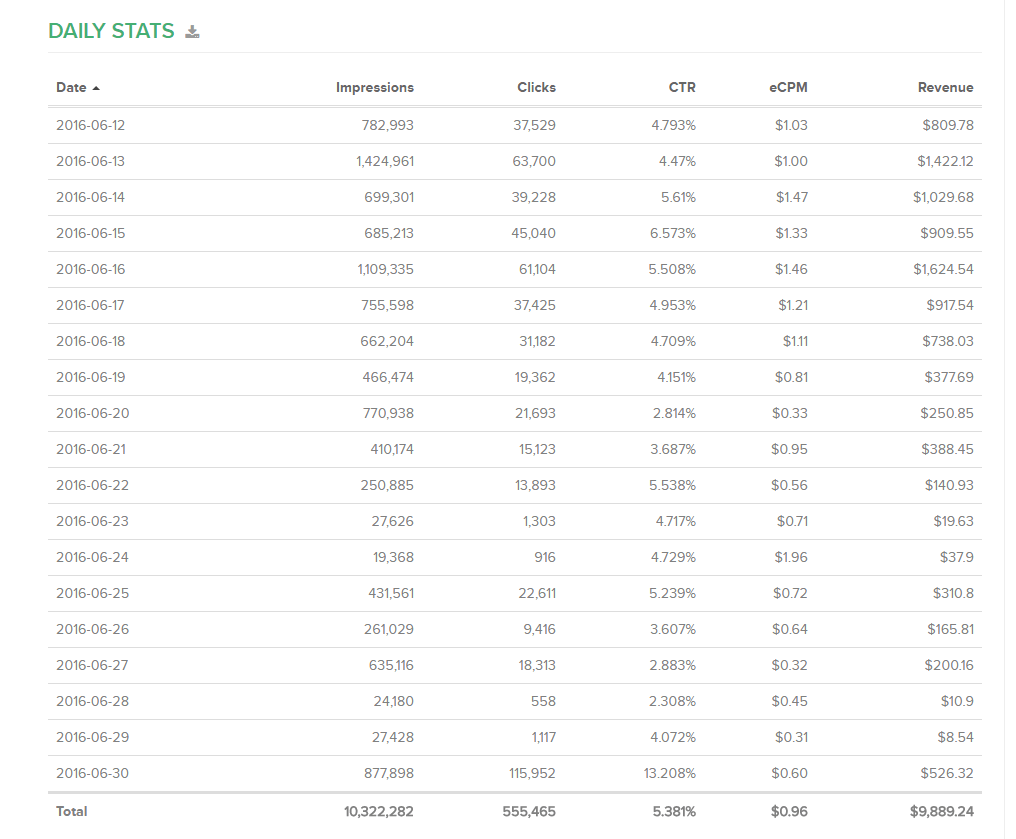 I made less in the last quarter of June as my traffic was very low. I had lots of returning visitors who didn’t click much on ads. However I was convinced with the results.

Just to let you guys know !! I placed Propeller ads for 1 day, it gave less than 100$. I also used Chitika ads for one day, it gave nothing. I used a few more and all were failing. So this was a perfect network.

The payment was paid on 4th July according to my manager’s promise. 🙂

Paypal was also an option but I opted for Payoneer as Paypal charges huge processing fee.

However since the payment was huge, Payoneer kept my payment on hold for 10 days. Those who follow me on facebook must be knowing about the story on how much worried I was and how I was contacting payoneer to get it sorted. However it was done and I got my payment in my bank account. 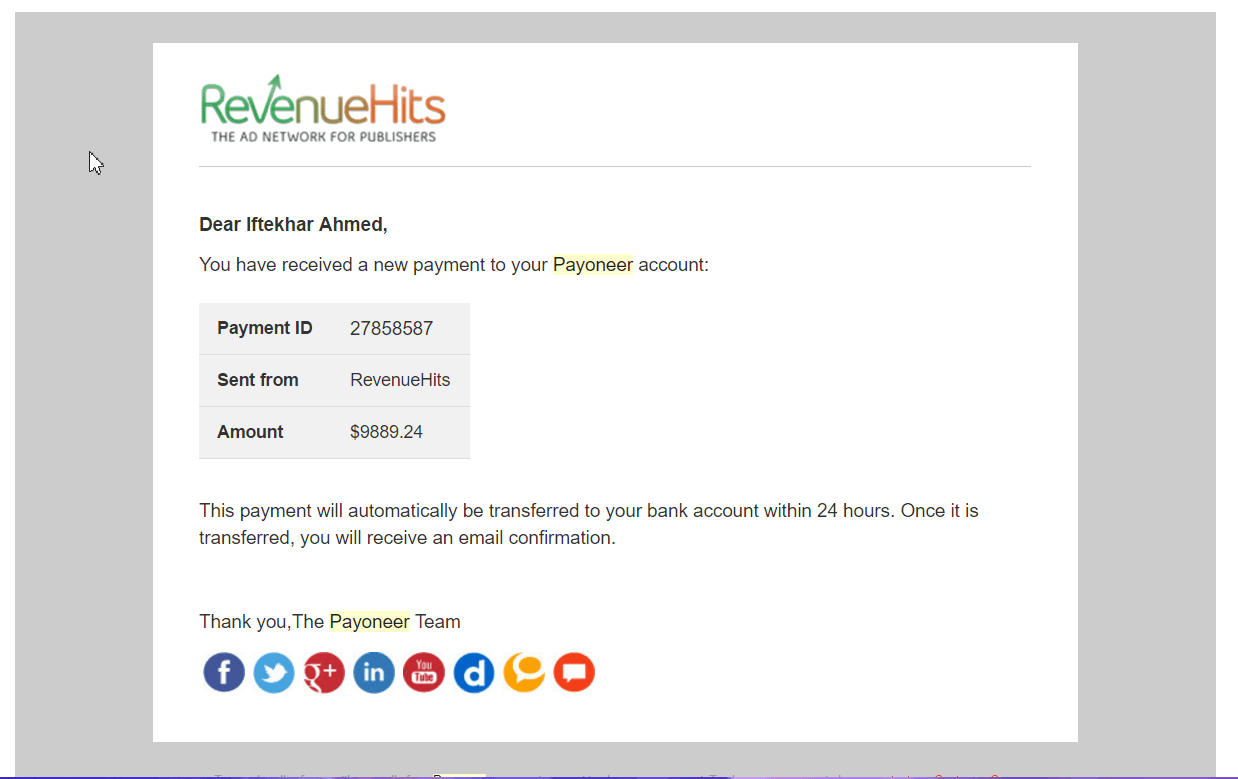 I continued with RevenueHits for the next month as well. It went well, I earned a good amount. However the trend of my keyword was going low and it ended sweet.

Let me add another point, I tried Popups in July !! And it gave some really great results..

So as you can see !! Popups of revenuehits can be really a money making tool. An avg of $7.89 eCPM from USA is really good. I made most of my money in the second month using popups !! That’s around $2429.65 from just popups in 10 days.

In total I made :

And I got paid on time. So overall my experience with RevenueHits is really great.

You might have a question, WILL IT GIVE SAME RESULTS TO ALL ?

Well, it all depends on your traffic, niche, GEO, etc. I have shared my numbers. Some may even not like my numbers and will say that I made very less as compared to my traffic. But it all depends on situations !! I tried many networks and only this proved out to be the best for me. So for me its big thumbs up to RevenueHits.

Since I am now in good contacts with RevenueHits team, I am told by them that they will respect all the members I bring up to their network and will also take care of your account like they did for me. You may well get upgraded to VIP account which will give extra benefits like, faster payments, better optimization, Easy communication, placement tips etc.

So if you really want to start with it. Join from the link below.