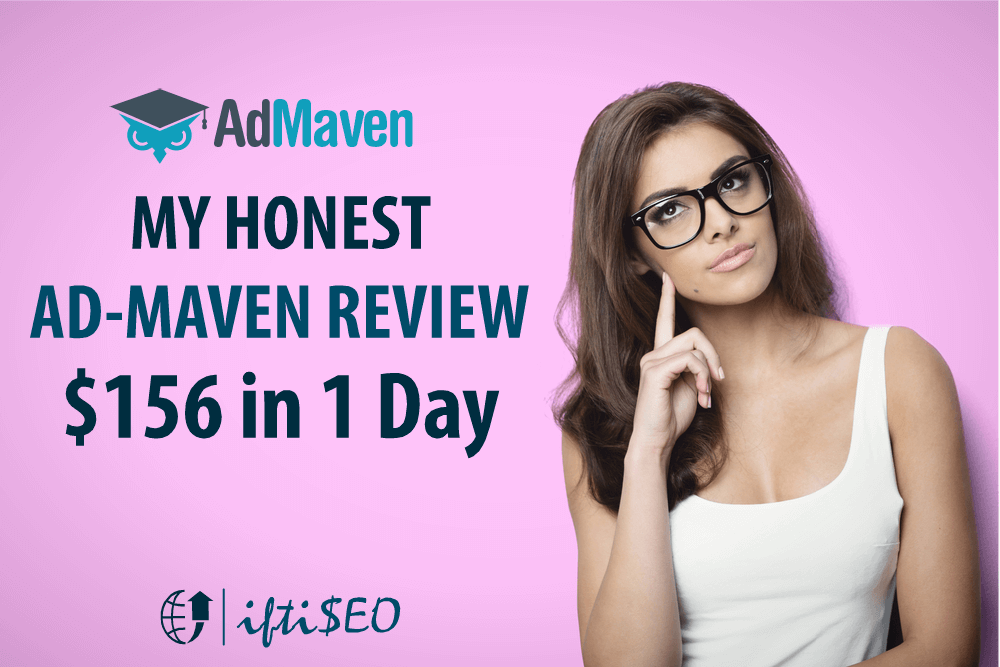 Monetization of a blog is really a tough task especially when your blog or site is not Google AdSense compliant. In such cases, we really get confused about choosing an Ad network that would pay the best…

Well, I face these issues a lot…

As I have multiple sites where AdSense is not allowed, I always have a chance to explore and use new ad networks.

This post is about one such Ad network that I explored recently.

Well, today, I will be talking about Ad-Maven !!

In this post, you will see my honest review of Ad-Maven including my Payment proof of $150. Well, $150 may sound less but it’s the amount I earned on the first day of using this network.

But before I share my story about Ad-Maven, let me share more about AdMaven and how publishers can make money using AdMaven Ad network.

Ad-Maven Ad Network – How Publishers Can Use it?

Well, first let me talk about what features Publishers can get while using Ad Maven ad network. This network is one kind of a premium ad network that can really help publishers earn money through pop ads and other ad formats.

2 special features about Ad-Maven is that publishers are provided with detailed reports about their earnings and each publisher is assigned with a very friend account manager. Publishers can easily contact the manager through email or skype to get all kinds of support.

The process of joining Ad Maven is really simple as you will have to simply sign up with them through a 3 field form. 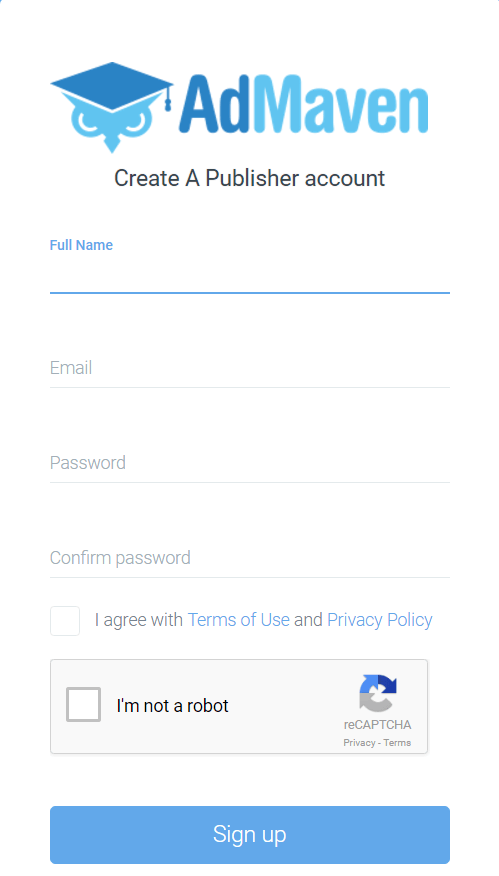 The approval process is really fast. And if you are in a hurry, you can directly contact any of their managers and they will assist you with everything.

Anyways, once you have your account ready. You will have the option to add sites and create ad units to run on them. This process is again really simple and straight. This network really impressed me with their interface, it looks so clean and easy to use.

The sites can be added under sites management.

Along with this you also can use formats like “button” or “banner” etc.

So, Which is the best format??

If you still ask me, I will recommend you to try all of their ad formats to really get a good data of what works better.

Moreover, The Ad-Maven products including Lightbox and Interstitial ads are fully compliant with Google Adblock scheduled to launch in January 2018 and will not be blocked.

Ad-Maven offers the publishers to cash out their earnings through:

They follow NET-30 system, that is payment is sent 30 days after you earn it. However, this thing again can be changed based on your performance with them.

I was offered payment on a NET-0 basis. 🙂

So this was all about how publishers can use Ad-Maven.

What if you are an advertiser??

Well, they provide an equally good advertising solutions for Advertisers to help advertisers increase the reach, boost sales and maximize profits. I myself haven’t used the Advertiser section of Ad-Maven, however, the system is nearly the same.

Advertisers have to first sign-up “AS AN ADVERTISER” and then follow the processes to start using the network. The manager assigned to advertisers are really good as they literally help advertisers with each and every tiny bit so that the advertiser get used to the network more easily.

One big question that arises here is…

Is Ad-Maven a good source of traffic??

What I believe is, no matter what the ad network is, it all depends on how well your product is and how well you target it to your audience.

A perfect landing page with good targeting will always bring you profit and that’s the case with Ad-Maven. The traffic provided by Ad-Maven is really good as all of the publisher sites added to their network are first approved by Ad-Maven team. The manual approval process rejects all low-quality sites leaving with only good sites to target.

So, if you are planning to run ads or offers then this can really prove out to be a breakthrough traffic source.

Since Ad-Maven has lots of Pop traffic to offer to the advertiser, it is advisable for advertisers to run offers like sweepstakes, app installs, lead, zip submits, installs etc.

I will recommend the advertisers to give a shot to Ad-Maven traffic source.

Well, now let me share my experience with Ad-Maven !!!

So, as many of you might be already knowing I and my Partner Karan Vyas own many sites on various niches that don’t allow AdSense. So this case-study is also about one of those sites.

I had a sense that the site can be monetized in a better manner and so I started checking my emails for offers from various ad companies and ad networks that I previously got. One among them was Ad-Maven.

I immediately contacted the person who sent me the email and soon we were connected on skype.

Since we were getting huge traffic, I was really concerned about the CPM rates and I contacted him on skype asking whether he can provide a FIXED CPM rate for my traffic. 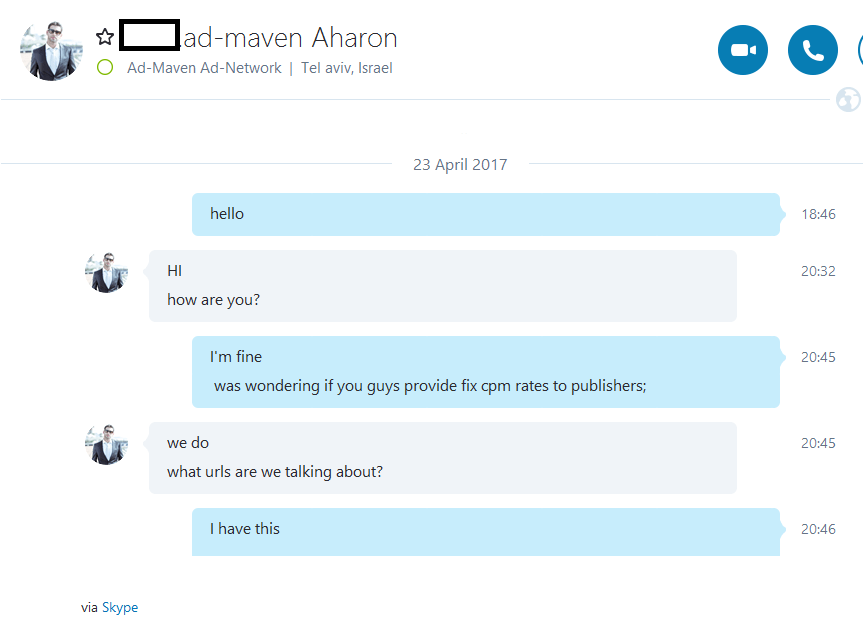 Well, he responded with a YES. 🙂

Before doing any negotiations we had a good chat about the type of traffic I had and the best possible ad formats that I should use. The manager recommended me various ad units and showed me a few live examples of how a particular ad would look on a live site.

The smooth and smart communication helped in fastening the process. (Time was important for me as my site was having really huge traffic and I was losing money).

I was getting loads of traffic on the homepage and it was flowing well on my inner pages. My homepage already had my banners set, so I decided to try them on Inner pages by using their POP ads.

Here are some snaps showing our discussion… 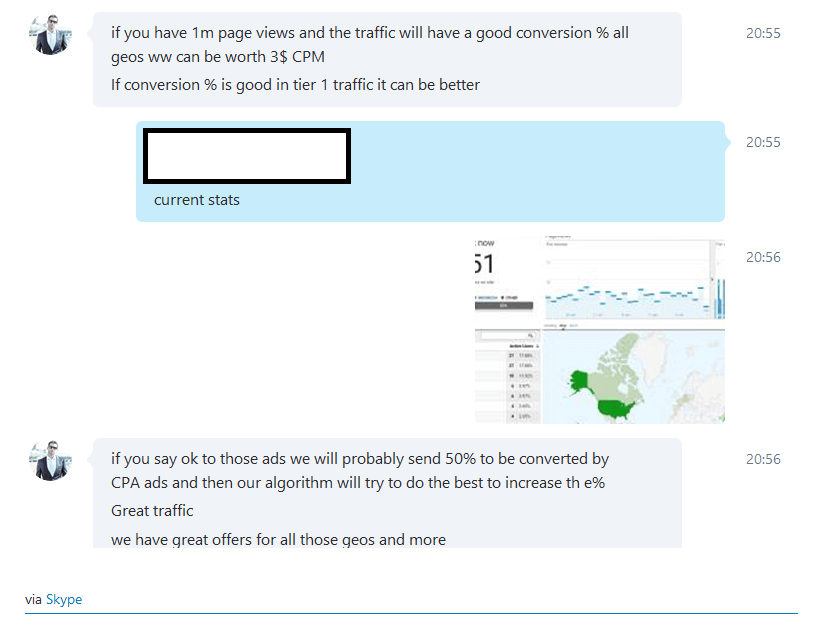 Since the traffic I had was from scattered locations, we negotiated a fixed CPM worldwide.

Well for pop traffic you really don’t get a fixed CPM by other networks, however, he agreed to pay me $3 which was later increased to $5. 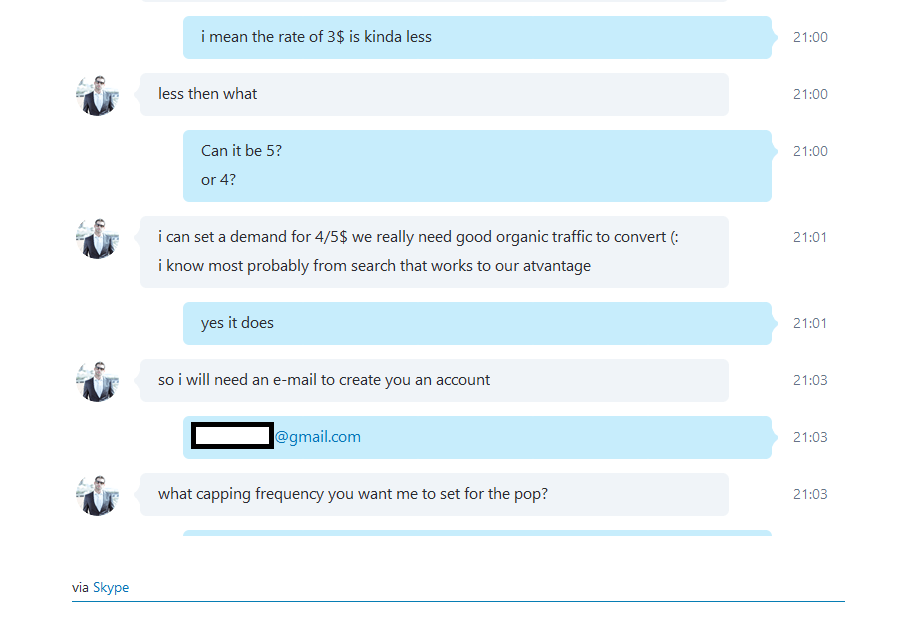 I decided to go with them as I was in a hurry and the deal sounded great. 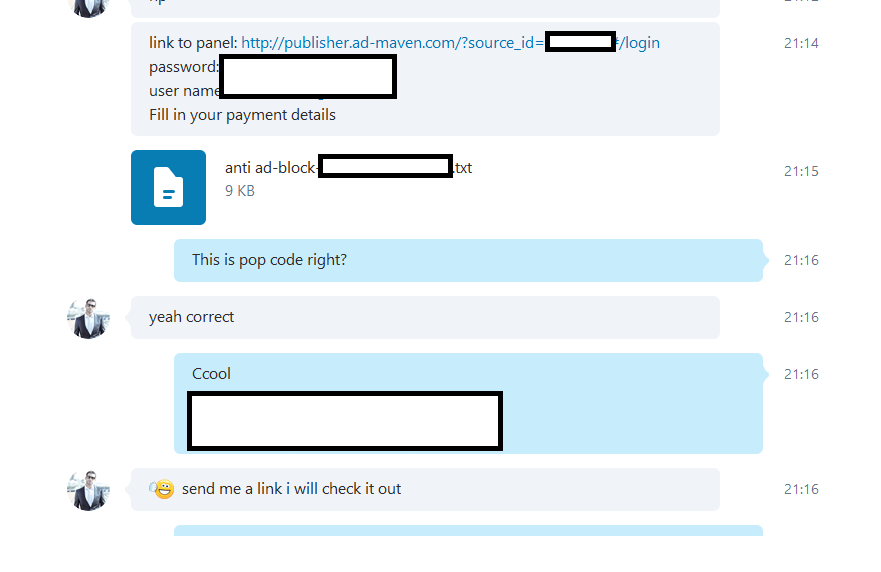 He then did all the part of creating ads and provided me all the ad codes. We decided to use a button link ad and a pop ad on the inner pages. 🙂

I simply had to implement the codes on my site and the ads were live. Smooth !!!!

The manager told me that the updates were made 3 times a day. That means I was not able to get real-time tracking and earning reports of my ads. But I knew that it’s a common thing with most of the CPM, CPA based ad networks. So I had no issue.

The next day, I checked my panel to see the stats !!

The button made $39.53 from 13,000 impressions at a CPM of $3 (the CPM was increased later). Also, I added this button at the end of my sidebar, so it really didn’t affect any user experience. It made an extra income. I should’ve used it all over the site 😛 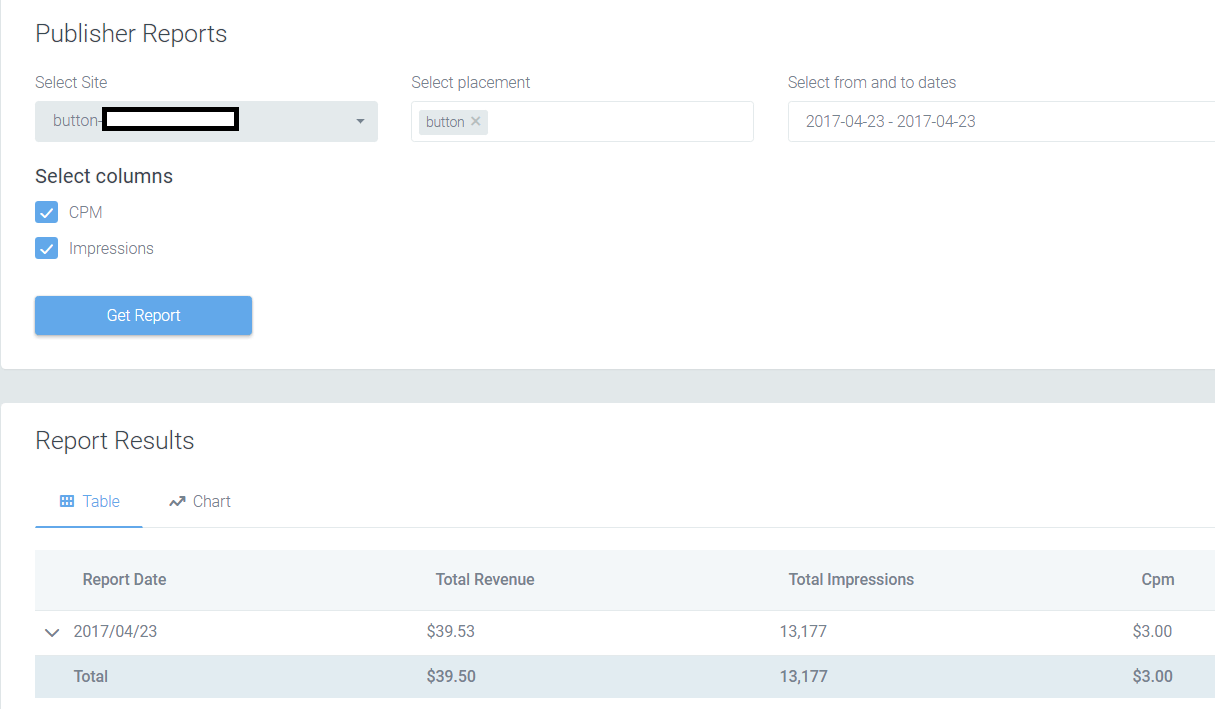 The pop ad was the main thing I was concerned about. I implemented the pop ads on 4 of my pages, these pages were getting good traffic but was nowhere in comparison to what I was getting at the homepage.

However, the pops also made good money. Here’s the ad-maven income report of pop ad unit. 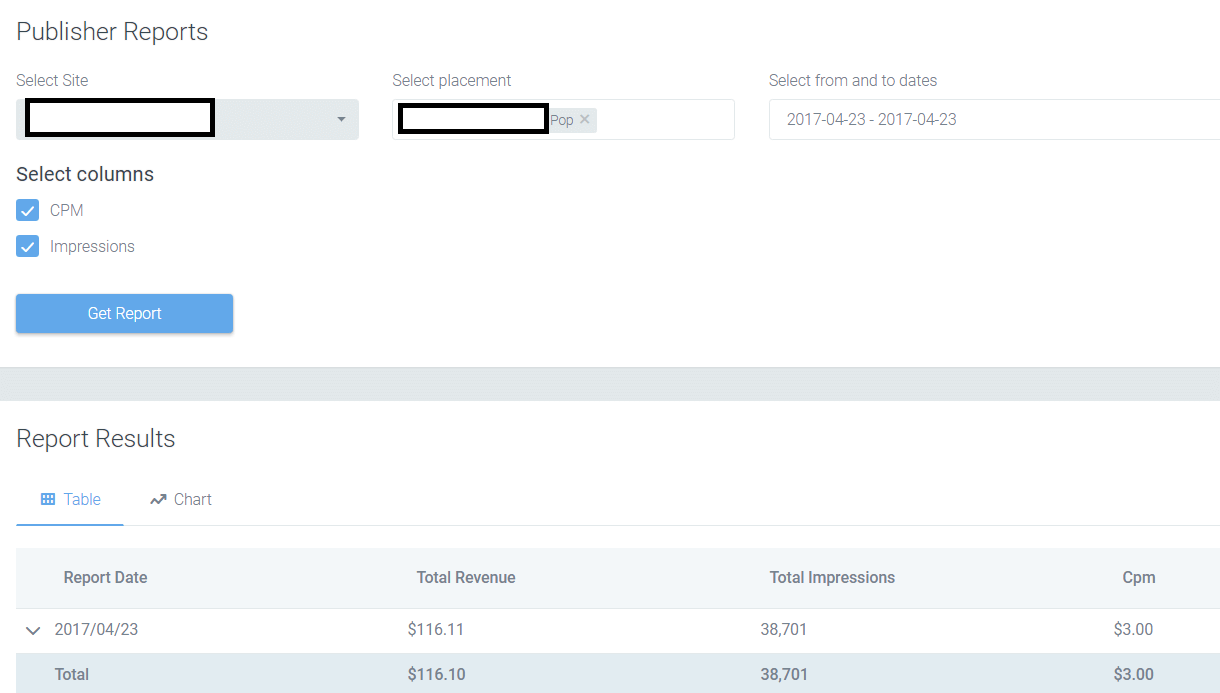 38000 Impressions made $116. Well, this is really a good number considering the fact that I was not using AdSense.

And finally NET 0 !! I was paid on the first day of the next month.

That means, my earnings of April 2017 was paid in the first week of May 2017. No waiting and smooth transaction. 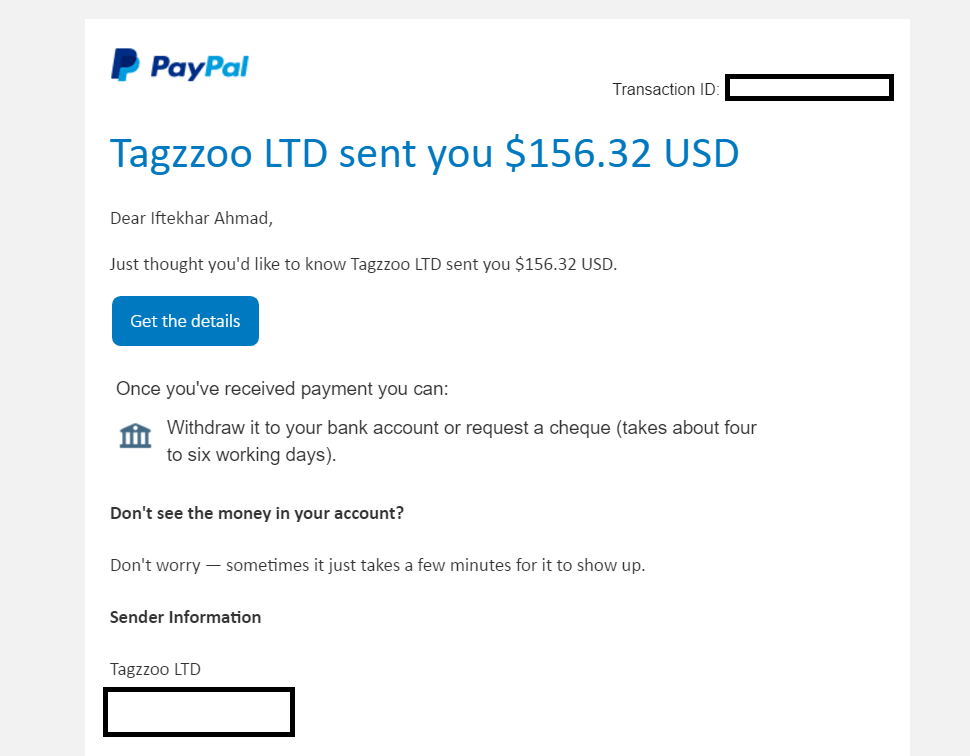 So that’s how I used and tested Ad-Maven for one of my high traffic websites. The results really impressed and I am now using them on my other sites whenever I get a good spike in traffic. 🙂